We stock Xtreme regulators for the following brands

Regulator R2200 installed. For custom regulators there will be additional cost

What is a regulator:

Below you see a picture of a Kral puncher w “before” (blue line) and “after” (red line) the fitting of a regulator. 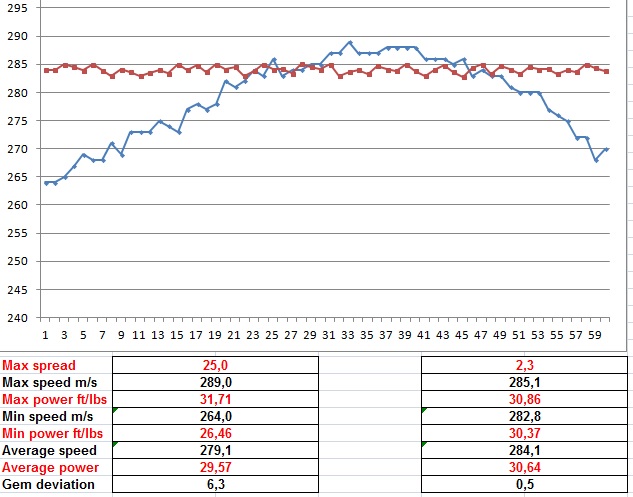 Why would you need a regulator?

A bit about PCP basics:
A PCP air rifle has a high pressure air reservoir. When firing the rifle, a “hammer” slams on a valve what will open a little and a certain quantity of air escapes. This airflow speeds up the pellet.

In an unregulated air gun you normally start with a pressure of about 200 bar. But after every shot this pressure will decrease. You can imagine when the hammer slams the valve and there is 200 bar of primary pressure on the valve, it will only open a tiny bit and giving the pellet a certain speed. After a few shots the primary pressure is reduced and there is far less pressure pushing against the valve; but the hammer still slams with the same force, so the valve will open more, giving your pellet a higher speed.  Therefore you can see you point of impact (POI) “climbing” after a few shots. Then after a certain more shots, pressure drops even further and your POI will go down again.

A regulator is a kind of internal pressure regulator that divides your pressure tube in two sections. The first large section contain the “primary” high filling pressure. The second section is just a tiny pressure chamber (plenum) that contains a certain quantity of air with a pre-set pressure that is needed for the pellet speed you desire. This we call the secundairy or regulated pressure. The regulator will keep this pressure constant every shot, until the primary pressure is equal or lower to the set pressure of the regulator. This will result in a very constant pellet speed, and also a steady POI of your pellet.

More benefits of using a regulator in your PCP.

Your rifle is set up to work in a relatively large pressure range.
After fitting a regulator you can optimize your rifle for the lower, constant, working pressure.
This means that you probably do not need as much hammer spring tension as before. This can also reduce air consumption.
Sometimes the hammer weight can be reduced too, this will give less movement inside the rifle. This will optimize the shooting behavior of your rifle.
On  several internet forums you can find tons of info for “tuning” your specific rifle in combination with a pressure regulator.